I’ve had my Crown for a couple of years now, and it has stayed at the top of the list as a rifle I turn to for the big hunts! The FX Crown is advertised as being Airgun Royalty and said to incorporate much of the innovative technology this company brings to the market. The rifle utilizes the FX Smooth Twist X Barrel and Interchangeable Barrel Liner System, which is an accurate configuration in all its many caliber options. And that another thing I like about this rifle, is that it is multi caliber. The crown comes in .177, .22, .25, and 30 calibers, and the barrels are quite simple and quick to change out. My gun has the .25 and .30 barrel, which provide 16 and 13 shots respectively. The rotary cassette magazines are proven, and are reliable and rugged, I’ve shot several tins of both calibers at this point in time, and have not recorded a single jam or misfeed. The stock on my gun is the synthetic (also comes in a laminate and walnut version), and has received the Airguns of Utah camo dip, which is a brilliant finish. They’ve done a couple of my rifles and it is a fantastic job, one of my favorites in a fairly extensive collection of hunting rifles! The trigger on the crown is also impressive, it’s an adjustable match specification and breaks like the proverbial glass rod, The gun utilized a 480 cc removable carbon fiber tank, that fill to END_OF_DOCUMENT_TOKEN_TO_BE_REPLACED

I’ve taken a lot of North American and African Game with arrow launching airguns. On this hunt, one of my favorite standard airguns for small game and predator hunting, gets a new accessory….. the FX Arrow Barrel! My regular readers and video viewers know that I have a strong affection for my FX Crown, and I have been using both the .25 and .35 calibers a lot. A while back I received the arrow barrel, and outside of some range shooting had not yet had a chance to use it. A rancher I know, manages his deer herd for quality animals, and unlike many landowners strives to keep a balanced buck-to-doe ratio. He told me I was welcome to come over and harvest a doe for the freezer. My family had been pushing for some biltong….. so, I was on my way! When I got to the property, it was on the cooler side, but having lived in Minnesota for the last few years my tolerance has shifted from that of my Southern California upbringing. I arrived in the morning and took a dirt road to the back side of the ranch situated above one of the water sources. Glassing down into the area, I saw a number of deer, bucks and doe, coming and going. I worked my way down using the sporadic clumps of trees for cover, I had the wind and the raising sun in my favor. I ran into a suspicious buck that kept walking around END_OF_DOCUMENT_TOKEN_TO_BE_REPLACED 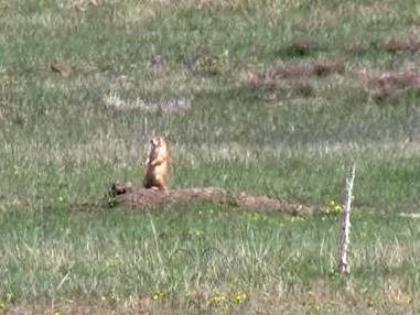 I’ve just arrived home from our 3rd annual prairie dog shoot in South Dakota, and was hanging with a group of guys I’ve come to look forward to seeing every year. I have to tell you, that this was by far the roughest year we’ve had, due to thunderstorms, constant rain and drizzle, and some of the thickest and most tenacious mud I’ve encountered. What was unusual for me was that even though I’d brought along a half dozen rifles, a couple compressors and tanks, and a case of pellets, I never pulled the trigger this weekend. Since it was such difficult conditions and not too many dogs surfacing, I decided to let the other guys shoot and I walked along filming. I have a pretty good eye for picking out partially submerged PD’s, and think I helped put the guys I hunted with on a few more dogs, but still the numbers were low. In towns where we’d normally drop 20 in an hour, getting a dozen in a day required some hard hunting and covering a lot of ground. Again this year, FX was the most used rifle, there were a couple Wildcats in .25 and .30, a few Impacts in .30, and a couple Crowns…. I brought my Crown .30 and Impact .30, but as mention didn’t have the opportunity to shoot them. I’ll be out of the country working most of June, but am off for another prairie dogs shoot in South Dakota then down to END_OF_DOCUMENT_TOKEN_TO_BE_REPLACED