I am going through my photo archives….. 175k airgun hunting photos in no particular order…. and came across this from a segment of American Airgunner that Rossi and I did several years ago. We’ve done some great hunts together over the years, but this was one of my favorites for a few reasons, not the least of which is we got two really nice hogs within 15 minutes. I hit mine and laid him directly over, Rossi’s took a hard hit but made it into the bush. The shots came in the last minutes of light, and we had to go after this pig in the dark, which is always interesting. After all my years of hunting, I still get the shakes from the adrenaline rush, some times before and some time after the shot. I’ve had it so bad, that I can’t climb down from a tree stand until I stop shaking, and it doesn’t have to be a huge trophy to induce it. The reason I mention it, was that not before or since have I seen Rossi with such a case of buck fever. On the first hog I told him to take it, nothing happened…….. then I heard a clattering and looked over to see him shaking so hard the gun was jumping off the sticks! I took the shot and we sat there high fiving, when we saw a second pig come in and challenge my downed hog. Rossi sucked in a breath, lined up END_OF_DOCUMENT_TOKEN_TO_BE_REPLACED 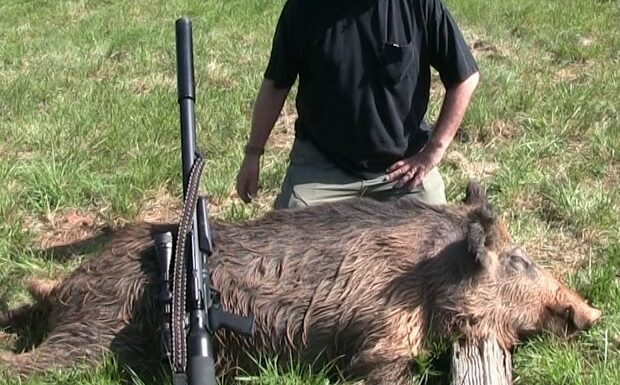 Hello everyone, sorry I haven’t been posting much, been out of country for work and just getting caught up since returning. Before starting I’d like to thank all of you that have been registering on this site, with all the uncertainty around YouTube’s policies on shooting and hunting, I want to have another way to reach out to you all with content. So, the last hunt I went on before heading abroad was another trip down to Texas. I took the AirForce Texan .357 on a hog hunt outside of Abilene, on a smallish property of a couple hundred acres a few miles outside city limits. This is a wide open property that connects some much larger farms, and gets a fair bit of hog traffic. I arrived at the blind situated over a feeder, on the back forty of this farm property where I’ve seen pigs, but never had the opportunity to shoot. The landowner, a friend named Shawn McDonald, asked me if I could throw a couple bags of corn in one of the feeders when I got out to the property. Seems it had malfunctioned in heavy winds and dumped all the corn in one go, and some other guys had seen that it was empty but not had a chance to refill it. I was going to fill it, then make my way to another blind further back, but it had been raining and I was in a rental 2 wheel drive SUV that I didn’t END_OF_DOCUMENT_TOKEN_TO_BE_REPLACED

Out in Texas after feral hogs with this powerfulair rifle from Airgun Depot. The Badger .40 caliber rifle has proven to be a great field gun, providing accuracy, power, and shootability enhanced by the custom Richards Microfit laminate thumb hole stock I retrofitted on it. Feral hogs are spreading across North America, but you’d be hard pressed to find a region that has been impacted more than Texas. Huge populations, open land, livestock operations to raid and an abundance of natural food sources, hogs are out of control here. This is a large pest species that you can hunt in Texas at reasonable prices, unlike deer hunting, which can run into the thousands of dollars. END_OF_DOCUMENT_TOKEN_TO_BE_REPLACED